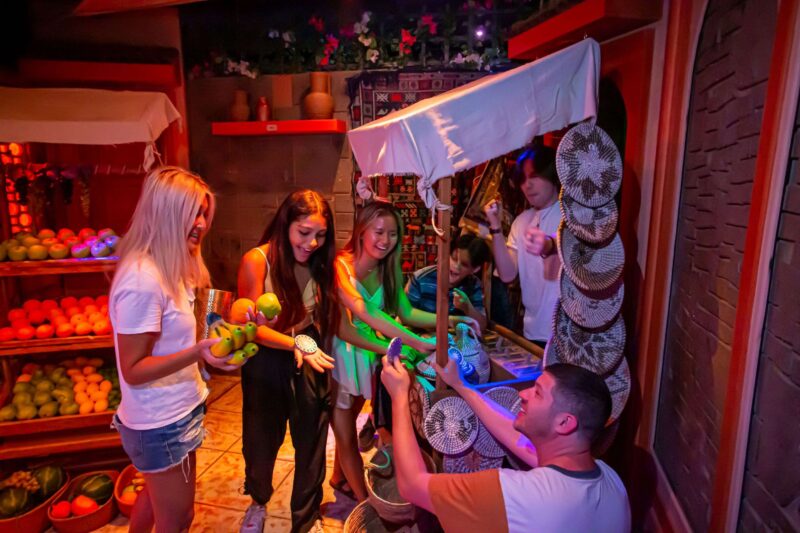 Throughout history, we’ve had plenty of entertainment opdTcctions. However, some activities still stand out. Escape rooms have become popular for those who want to experience something unique and exciting. They are immersive puzzles that require teams to solve riddles, challenges, or tasks within a set time limit.

However, have you ever wondered how it all started? In this blog post, we’ll explore the history of escape rooms and how they evolved into what they are today. Keep reading to learn more!

The Genesis Of Escape Rooms

Before the “escape a room” concept exploded in real life, it began as an iconic computer game. John Wilson’s Behind Closed Doors first emerged in 1988. Although text-based games started to disappear after point-and-click adventures became prevalent gradually, this notion became increasingly popular.

The release of Toshimitsu Takagi’s Crimson Room in 2004 gave escape room games a major boost. Not only did it become trendy, but many consider it to be the first game that captured what an escape room experience should look like today.

How The Idea Was Brought To Live

In 2007, Takao Kato transformed these virtual games into a genuine life experience. He created an escape room comprised of only one chamber inspired by the modern “pop-up” rooms. This concept grew in popularity throughout Japan and beyond quickly!

Although this game is often considered the originator of escape rooms, other theories point to alternative games or The Crystal Maze from Channel 4. Undoubtedly, without these predecessors, modern escape rooms may not have come into existence at all.

Escape rooms have become increasingly popular, with themes ranging from pirates and politics to shops and underwater adventures. During the pandemic, people flocked to online versions of escape rooms that were accessible through Zoom. But there has also been a surge in virtual reality escape room experiences!

Were you searching for an “escape room near me”? Well, if you’re in Temecula, MindTrap Escape Room is your best option for a thrilling live escape game. After the founders, Nathan and Emma, traveled with their two kids to Europe in 2016, they participated in an Escape Room game and were immediately hooked.

MindTrap Escape Room is the best Temecula escape room. We offer interactive mind games and puzzles in many immersive themed rooms, including 40 Thieves, Area 51, Taken, and more. You don’t need any previous experience or knowledge to enjoy the game, as our experienced Game Masters will give you all the necessary instructions. Book your appointment and have a blast!

Can you feel the fever?! El Dorado county is hiding the richest secrets of the country right below the surface. Kanaka Jack is rumored to know the location of a hidden mine – finding it will make you rich beyond your wildest dreams! This is an escape game with an explosive secret that will bring the whole family together. Raid Jack’s cabin, unlock the entrance to his hidden mine, and blast your way out!

TAKE A JOURNEY TO SAVE THE LAND OF OZ!

The Wicked Witch of the West is up to no good! She has cast a curse upon the land of Oz that will evaporate any trace of her only weakness – water. You and your friends must band together and complete the Wizard’s plan to save the wonderful land of Oz – before it becomes a desert! Join the Munchkin Militia, brave the Dark Forest, and of course, journey to the Emerald City in this family-favorite, magical escape game inspired by Baum’s beloved American fairy tale.

Allied attempts to stop the launch of the V3 rockets as part of Operation Longbow are successful… and the
Axis powers have turned to the unholy powers of the undead! Your commando team must infiltrate an abandoned medical facility under cover of darkness, face the horrors of the enemy experiments , and defeat the zombie soldiers before you join their ranks!

The great King Arthur who once wielded the mighty sword known as Excalibur, brought together his loyal knights to determine what would become of the ancient blade. They had grown old and tired and it would soon be time to find a champion worthy enough to wield Excalibur. So, with a binding magic, Merlin placed the sword back into the stone…Sealing it until the day a true champion presented themselves. Face the trials left behind and see if you are worthy to pull the sword from the stone and take the crown as the new protector of Camelot.

CAN YOU UNCOVER THE CONSPIRACY?

A mystery based escape room centered around some of the greatest conspiracies of our time. Players are tasked with linking together the lies of the New World Order, The World Economy, Assassinations, The Moon Landing, Fluoridated Water, Lizard People; the list goes on. With less than an hour to uncover the grisly details before mysterious agents arrive on scene, the players must piece together clues and connect the dots to solve the biggest mystery of their lives. Sharpen your investigative skills, grab your tin foil hats, and see if you can unravel the conspiracy.